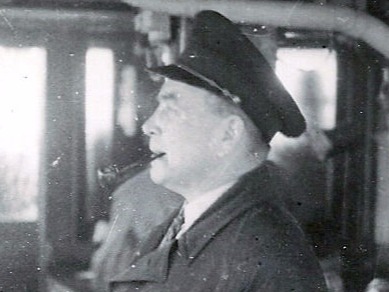 Master Mariner, the captain held the lives of all passengers in his hands.

August Linde was forty-seven years old at the time of the voyage.  Married to wife Hilda, they had two daughters Heili and Luule.  He was a Master Mariner, ticketed for the deep sea and also owned a farm.

Captain Linde was approached by Alexander Kalbus to take command of a ship of refugees to America.  Part of his job was to get the necessary clearance papers for the ship, and to look after the ship.

In November of 1948, Linde was called into Stockholm's Canadian Embassy and advised that the upcoming voyage was contrary to current laws. After much discussion, Embassy authorities asked if the Captain himself had a Canadian Visa.  Receiving, of course, a negative answer from the Captain,  the authorities stamped the necessary approvals into Linde's passport.

He and family were only some of a few passengers who had Canadian Visas and arrived in Canada legally. 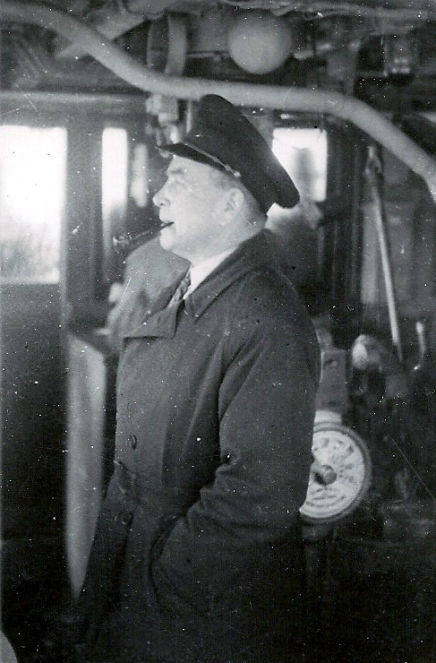 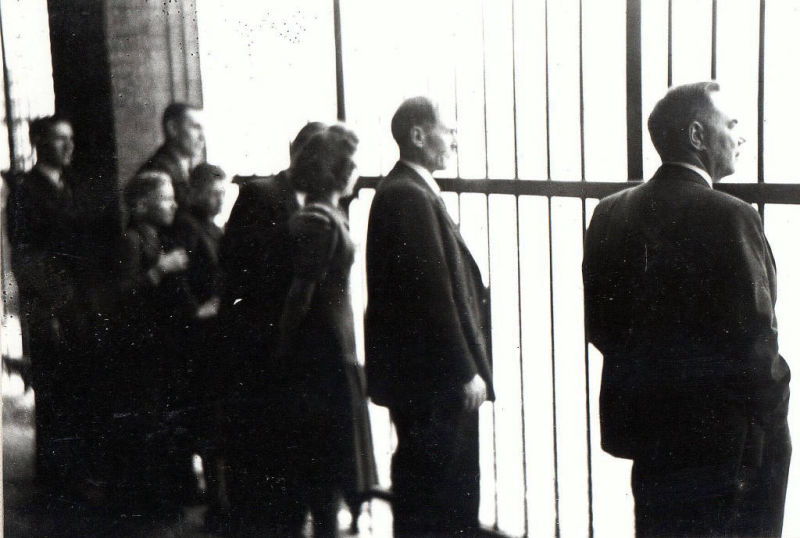 August Linde (right) gazing towards the sea at Pier 21 in Halifax. 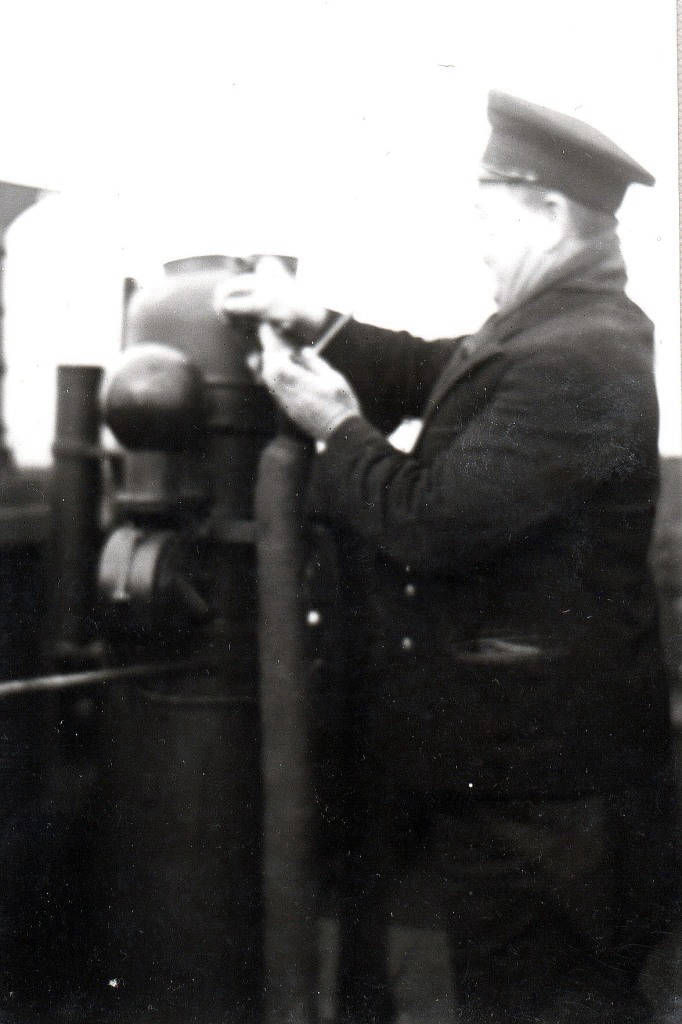 Captain Linde onboard the Walnut. 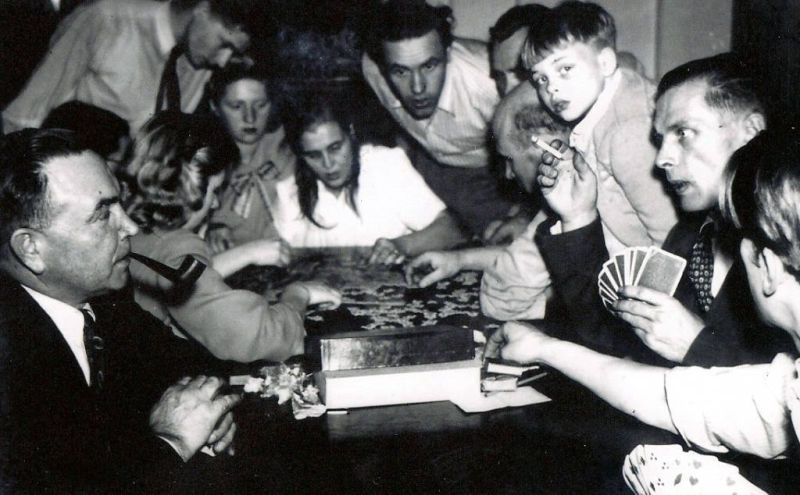 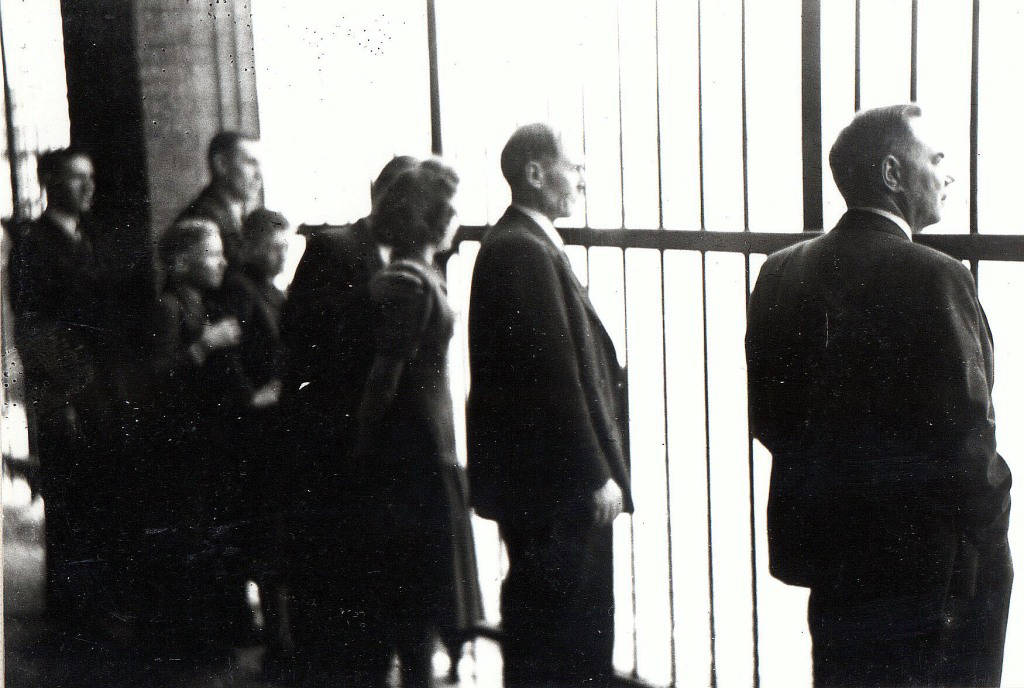 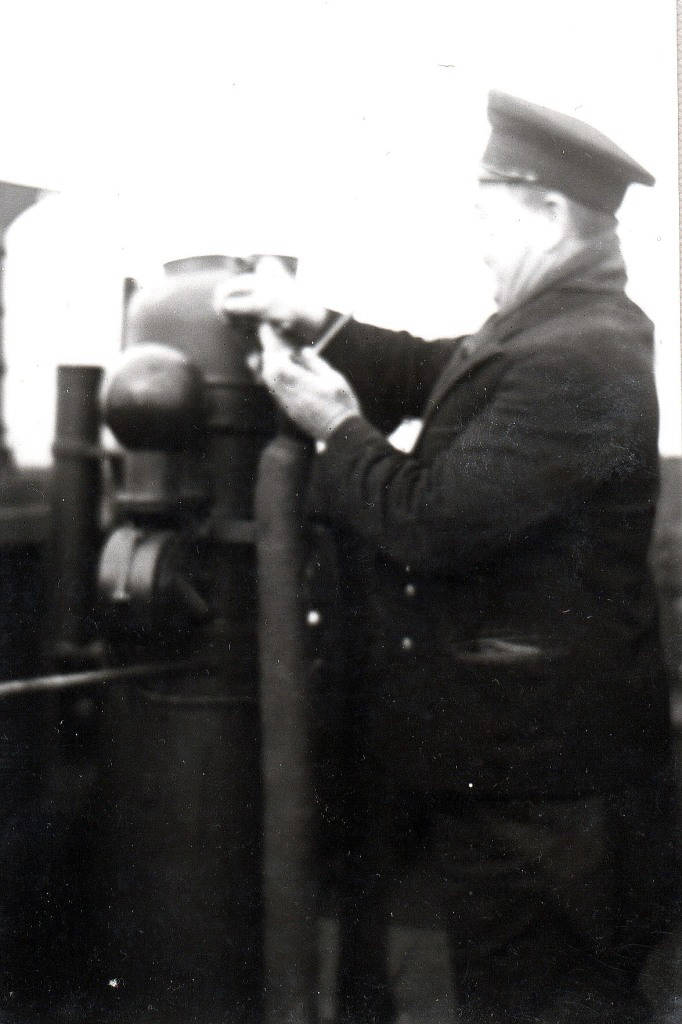 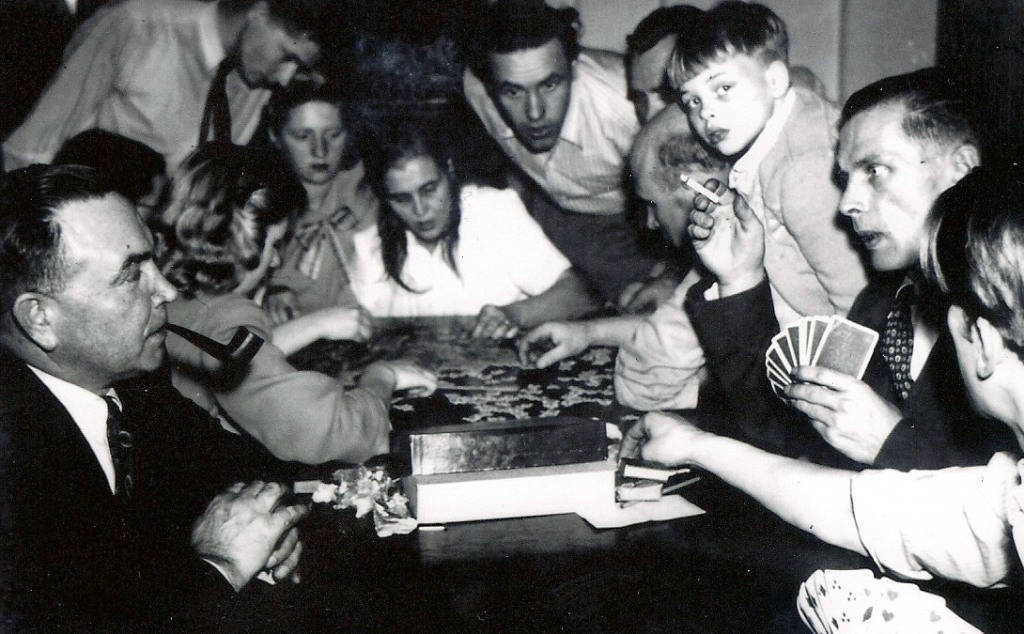 Posted with the kind permission of the Linde family.

Examination held at the Immigration Offices, Halifax, N.S.  in the case of August Linde, Captain of S.S. "Walnut".

Q. What is your full name?
A. August Linde

Q. Are you married, single, widower or divorced?
A. Married.

Q. What is your race and citizenship?
A. Estonian, Estonia.

Q. Have you any family?
A. Two children.

Q. What is your real occupation?
A. Real profession is Master Mariner, but at the same time I had a farm in Estonia.

Q. When did you leave Estonia last?
A. Twenty-fourth of September, 1944.

Q. Where did you sail from?
A. I left from Soela on the island of [illegible], Estonia.

Q. Where did you sail to?
A. Sweden

Q. What happened after you arrived in Sweden?
A. We were put in a Refugee Camp on the mainland, S___? B___? [illegible].  I stayed there about two weeks and was released (my family was not), and then went to Stockholm for two or three days and had my papers cleared by the Swedish authorities, then proceeded to Gothenberg.

Q. When were your wife and two children released?
A. Around June, 1945, and they joined me in Gothenberg.

Q. What were you doing in Gothenberg?
A. I was working there for awhile, then I went to sea onboard the M/S "Canada".

Q. What position did you hold?
A. Ship's Carpenter.

Q. What did you do after that?
A. I returned home to Gothenberg until the tenth of June, 1947, then I joined the ship, Star Areturus, a Swedish ship, under the Panamanian Flag.

Q. What position did you hold?
A. Second Mate.

Q. What was your last permanent address in Sweden?
A. Sxxxxxxxxx, xx, Goteborg.

Q. What happened after you left the Star Areturus?
A. I was approached by Kalbus Alexander. [Correct name is Alexander Kalbus.]

Q. What did he approach you for?
A. I was approached about sailing a ship to Canada. He wanted me to take command of the ship to sail Refugees from xxxxxxx [crossed out and illegible] somewhere in America; either Canada or the United States. He took me to look at the ship to see if it was suitable for the trip.

Q. What ship was this?
A. The Walnut.

Q. Who owned the Walnut at that time?
A. A Swedish firm called Stem Olsen Company Limited.

Q. What happened after that?
A. I approved of the ship for the voyage. Kalbus had a group of Refugees who were willing to pay to escape to America, and he collected $1100  [difficult to read amount] Kroner for full-grown passengers.

Q. Did he raise enough money through passage payments to pay for the ship?
A. Kalbus had started a company called the Maritime Walnut Limited, and with the proceeds from the shares of this company and the passage money the company purchased the Walnut.

Q. Who were the Officers of this company?
A. I don't know off hand. Kalbus was elected chairman of the company, and there were seven other officers. My job was just to get the Clearance Papers, and look after the ship.

Q. How many shares were there in this company?
A. I think there were 200.

Q. How much did the shares cost?
A. 500 Swedish Kroner each.

Q. Do you own any shares in this company?
A. Yes.

Q. How many?
A. They gave me xx shares as my wages as Master of the Walnut, and I bought xx myself.

Q. How many shareholders in this company?
A. I think there are about 40.

Q. What type of ship is this Walnut?
A. It had been a British Naval Corvette.

Q. How did this Corvette get to Sweden in the first place?
A. This company bought three of them, and converted them to cargo ships.

Q. Have you a list of the shareholders of this company?
A. No. Kalbus has the list.

Q. Do you think it would be possible to obtain a list of the shareholders?
A. It is up to him.

Q. When was it decided to sail this ship to Canada?
A. Before we sailed all the people decided that they wanted to come to Canada.

Q. How did they make this choice?
A. They figured that there was lots of open land, not so many people there, and it was a good chance to make a new home.

Q. Did you have money for passage to Canada?
A. There was free passage for myself and family plus [illegible] shares as payment for my services as Master.

Q. Under what registry did this ship sail to Canada?
A. Before we left the company managed to obtain [illegible] registry from the Panamanian Council in Stockholm, and we sailed under the Honduras Flag.

Q. Did the company spend any further money on the vessel after it was purchased?
A. Yes.

Q. What was this money spent for?
A. Refitting the ship and purchasing life boats.

Q. What was her last port of call?
A. Lysekil, Sweden.

Q. Where was the ship refitted?
A. Gothenberg.

Q. Where did you sail after leaving Sweden?
A. Next port was Sligo, Ireland.

Q. And from there?
A. Sydney, Nova Scotia and then on to Halifax, arriving at Halifax on the 13th of December.

Q. How many passengers were aboard the ship when the ship arrived at Halifax?
A. 347 including the crew.

Q. What does the company intend to do with this vessel?
A. To sell it.

Q. How much do you think they can get for this vessel in Canada?
A. I don't know. The company is selling the ship.

Q. What is the exchange rate for the Swedish Kroner and the Canadian Dollar?
A. $1.00 is equal to [illegible] Kroner.

Q. What ticket do you hold?
A. Master's ticket issued at Tallinn.

Q. Was that ticket for deep sea?
A. Yes.

Q. Did Alexander Kalbus come over to Canada with the Walnut?
A. Yes.

Q. Was he a member of the crew or passengers?
A. He was a passenger.  I forgot to tell you that there is about $2,500.00 owed by the ship to the passengers for loans made to the ship during the voyage to buy [illegible - bunkers?] and other provisions.

I certify the foregoing to be, to the best of my knowledge and ability, a true transcript of the notes taken by me in connection with this case.
Signed by the secretary and Examining Immigration Inspector

Captain Linde and his family eventually settled in the Vancouver area of  British Columbia, Canada.

So moved by the hospitaly of the citizens of Sligo, Ireland, and Reverend Browne, Captain Linde sent this Christmas card in 1948.

Just a few lines to let you know and thank you and all other people of Sligo for the good deed you did for us at Sligo. We and our children will remember your people for ever. We met a gale two days after we left Ireland which lasted for two days, and met another gale 700 ml off Cape Rose . First land we sighted was Cape Breton N.S.
From Sligo to Cape Race 10 ½ days and from Cape Race to Sydney N.S. 12 ½ days. With God’s blessings we arrived all safely. God bless you.  A. Linde. Capt

Holiday Cheer
And all good wishes for
A Happy New Year 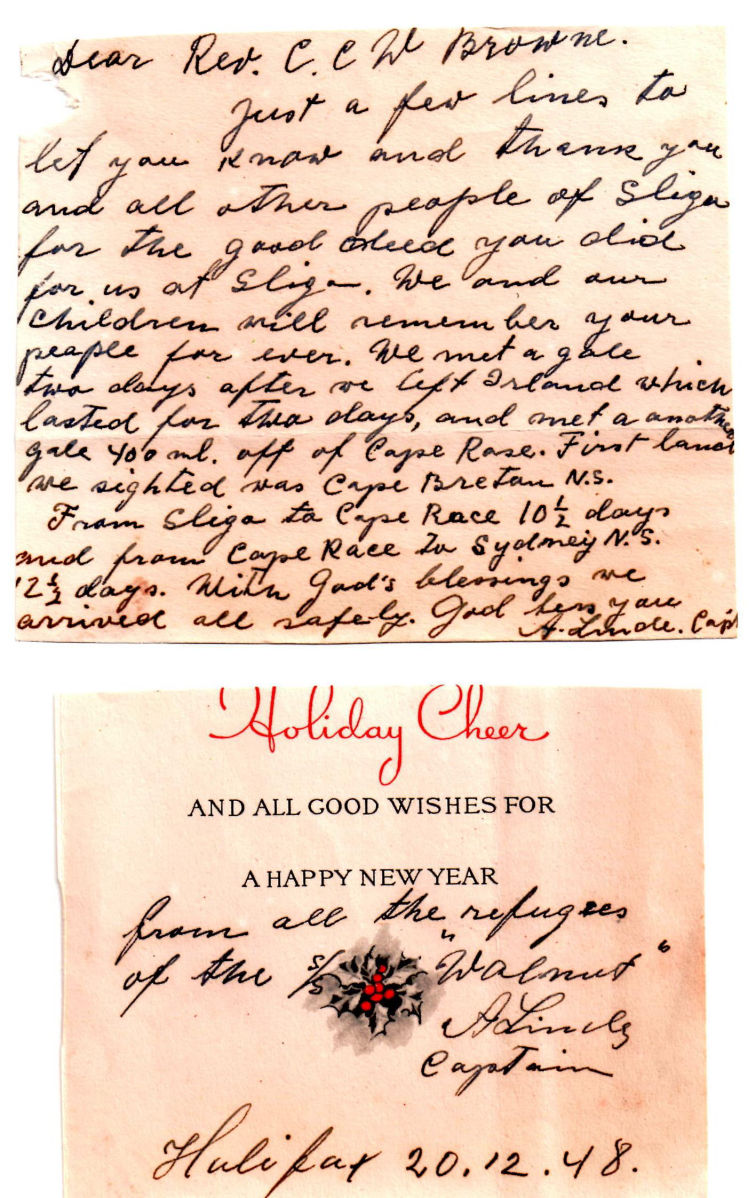